WHAT IS THE TAXIDERMY IN FACT? THERE IS AN ANIMAL, EXCISE ITS SKIN FROM ITS BODY AND MAKE A SAME SHAPE PLASTIC BODY AND COVER IT WITH THE SKIN. TAXIDERMY PROJECT IS A TRIAL WHAT HAPPEN IF I CHANGE THE FORM AND PUT THE SKINS DIFFERENT KIND OF SHAPE. IN THIS PROJECT WHOSE GENRE REQUIRES A HYPERREALISTIC APPROACH NEVERTHELESS MIXES WITH THE MYTHOLOGICAL, AND THE OBJECTS – USED TO BE LIVE ANIMALS – FIND THEMSELVES IN ABSURD SITUATIONS, CAUSING THEM PAIN WHILE BEING HUMAN TOYS.

The one truly grotesque piece is by Szollosi, who takes the skin from a real cow’s head and, in an act of demented taxidermy, stretches it over something resembling a beach ball. The piece is both stomach-churning and compelling. You find yourself responding to the textures of the fur and the lifelike glint in the Bambi-like eyes, while a voice in your head is telling you that something is very wrong.

My Pets at SCOPE Miami

My Pets at Decadence Now! 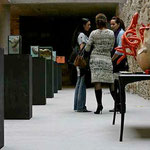 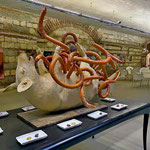 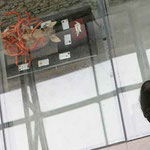 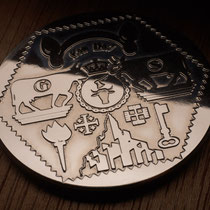 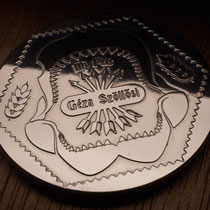 2- for those who don't know much about you and what you do, how would you explain your technique and your concept?

What is the taxidermy in fact? There is an animal, excise its skin from its body and make a same shape plastic body and cover it with the skin. „My Pets” is a trial of what would happen if I change the form and put the skins onto different kinds of shape. In this project whose genre requires a hyperrealistic approach nevertheless mixes with the mythological, and the objects – used to be live animals – find themselves in absurd situations, causing them pain while being human toys.

The border between the kitchy taxidermy and actual art is very thin. This is the very essence of the work. Let there be a meaning, a point in making an object that could only be created from a previously living animal. Cai Guo-Qiang works with artificial animals, the point there is the situation, which is “played” by the animals. In my works the once living creatures sustain their being as an art object. This is the sadness, the transiency, the pain, however it represents the faith in the eternity of art. A true  “natura morta”, where dead nature is reborn in a different form. (Naturally none of the animals was killed in order to create my art pieces, I buy the only the fur.)

3- what do you think or feel when you make one of your works? Isn't it annoying sometimes?

I buy the animal skin ready to use, therefore it is not unpleasant, it has a redolence of a fur. To work with formalin or resin is much more annoying.

4- wich is the work you like the most and why?

I am always excited the most by my current work, which is a project running with a title: KITIN. I dismantle tropical bugs into their pieces, such as head, thorax, abdomen, legs etc.… I clean them and then reassemble them again. Naturally they result not in bugs, but in robots, mecha-bots, super heroes known from Block buster movies. They become such toy-figures that I couldn’t get during my childhood. The only joke remains that they become much more attractive than the “real” ones.

5- how much time takes you to think and make one of your works? Do you often start a work and then have to stop and begin again? How is it when you make sculptures with animals

All of my projects require a lengthy technical preparation, as I work with organic materials. After a profound groundwork I finish the various procedures relatively fast. It is also important because there is no time to waste in-between the different phases. The raw meat turns (Flesh project), the fur dries (My Pets) and the resin hardens (KITIN).

6- how do you remember your first steps doing this kind of work? Was it difficult for you to explain what you wanted to do with this?

The idea is born in a glimpse of a moment. I have the image in my head. The lengthy part is the technical realization. However while working on a certain project, where I know the guiding principle, I only have to obey the rules set by myself and then it works by itself while creating a new work. In my experience everything that goes through my hands gets a particular “Szöllősi” taste. I’ve got no reason to worry. General rule is: I cause a self explanatory object run into a contradiction with itself.

7- where did you studied? When did you started thinking about making art with nature in your studies?

My interest in art started in the 90’s. Back then I was influenced by the American scandalous artist like: Robert Mapplethorpe, Joel-Peter Witkin, Cindy Sherman... In the Moholy-Nagy University of Art and Design I wrote my theoretical exam about them, a particular viewpoint: how scandals influenced their art...I mean the extreme sado-mazo coming out in Mapplethorpe, carcass vilification of Witkin, aggressor man-hating feminism of Cindy Sherman. If you examine these artists there is something they have in common. What's do we percieve as aggressive vision? But at same time their artworks are beautiful without being overwhelingly disturbing. This inspires me.

One could say I am lazy, therefore I use organic materials that are “ready-made” like the frozen products, I only have to assemble them.

I don’t generate the effect evoked by my sculptures, the flesh, fur, chitin does. Essentially, they can be regarded as “Duschamp-type” ready-mades, where the original object carries the whole show.

In fact I learnt the Bauhaus system at the university, I'm not an instinctive artist. I plan everything before I start a project. We need to baseline the matter, technique, media, style and lastly the effect of a viewer.

8- which is the inner concept in your work? What do you want the world know about you or about animals?

A cow’s heads rounded-out into three-dimensional cartoon figures, submit exclusively to the unconscious logic and marketing aesthetics of the bad conscience of consumerism, and set them on stage, offering as a gift the experience of collective hallucination to viewers hungry for spectacle.

My basic condition, unrepentant levitation over the abyss, is an especially intolerable position for many in a territory in which the gravitation is so strong that most are forced to live their entire lives in a mental force-field close to the ground. In this society, currently several, completely disparate approaches to the body exist side by side, while their polarised adherents battle one another: on the one hand a demure aspect rooted in Christianity, struggling with body-loathing and guilt; on the other a body-manic, sex-centred approach, reinforced by mass-media, which views man as an object stripped of its metaphysics. My workshop is located in the crossfire of this tense, endless mental battle, convincingly articulating the rhetoric of the flesh, whose unabashed assertions prod the brain of the receiver with the sharpness of a scalpel; and if many feel that these responses are too audacious, that is only because they have not yet raised the appropriate question, which is naturally: Is there life before death? The effect that my sculptures generate is not caused by me: it is simply the flesh, animal skin that produces it.

9- your work is made by animals bodies and also have some kind of darkness. Which is your idea about life and the death?

Why is that, if the art talks about death it’s a problem, but while watching CSI at 7pm it is not? Anyway it seems that CSI builds upon the so far prohibited necrophiliac erotics that has already been digested by the mainstream media. In each episode there is a detail, when the camera goes around in most cases pretty but obviously dead body that is being aesthetized in this sense, even sexually. Therefore if this is ok for a mainstream media, as there is no more taboo that the pop culture could not trespass it becomes meaningless to use the words like taboo, shocking etc…

I don’t take it personally. I mean my art does have an effect on the viewer, but isn’t that every artist’s dream? Don’t we all hope to touch the public emotionally?

Major part of my works builds upon deviant use of body. The symbolic use of body (animal, human) has a significant role in picturing the tensions, the turmoil of “the body of society.” The idea of human body as “cultural text” gives a clue to read the bodies in my works as texts that uncover a lot about society and the culture.

10- are you working on something knew these days?

The project KITIN  paraphrases the collective dreams of pop culture through personal myths. Instead of Blockbuster, D.I.Y. robots arrive from space to enslave humanity. I dare to wander the no man’s land between the organic and the inorganic to propagate my mecha-insects which, in the metallic shine of chitin, melt into a frighteningly strange but snug vision. They are perfect war machines: come not only to conquer Earth but to repopulate it. In order to succeed, they exploit their human hosts and thus are also messengers of a new type of interracial love.

11- where do you (or we) see the progress of your career?

This is a difficult question. Nowadays we can’t be sure which road will make sense on the long run. An international blog, an exhibition, interview… anything can happen.